They are the unsung heroes, saving shots and making memories for a century and counting

Caddies have been part and parcel of the Pinehurst golf scene from the beginning—much like wire grass, pine straw, two-down presses and 19th hole libations.

John Daniel, better known by his nickname “Barney Google,” helped Harvie Ward read the greens of Pinehurst No. 2 and 1-putt 18 times over a 36-hole North and South Amateur championship win over Frank Stranahan in 1948. “Ward didn’t beat Stranahan today,” one spectator was quoted as saying in Golf World magazine. “Barney Google did.”

Jimmy Steed handed Sam Snead the clubs he used to win three North and South Open titles from 1941-50, finish second three more times and traveled with him to Greensboro to work most of the eight Greater Greensboro Open championships Snead collected. “Sam had a great many talents, but one of them was NOT selecting clubs,” says Bill Campbell, a noted competitor of the era. “Jimmy had the knack of giving Sam the right clubs.”

Jerry Boggan dressed like a peacock and trouped through the pine forests chasing Billy Joe Patton’s errant shots during Patton’s three North and South victories from 1954-63. Boggan delivered newspapers starting at 2 a.m. and then would show up at the golf course to lug Patton’s bag, dressed for the weekend in a green suede sweater, green alligator shoes, yellow pants and a yellow and green plaid cap. “I’m ashamed,” Patton would say. “My caddie looks better than me.”

And then there was Fletcher Gaines, who carried for Tommy Armour, Gene Sarazen and Porky Oliver in the North and South Open and later for Curtis Strange during the Wake Forest golfer’s two North and South Amateur wins from 1975-76. Strange used to ask Gaines to watch him carefully at the top of his backswing and let him know if his hands and the clubhead were “square.” Gaines didn’t know what Strange meant, but he would answer nonetheless, “Yeah, it looks square to me.”

“These guys are national gems. They are walking history books.” -Don Padgett Sr.

Told years later that Fletcher had been shoveling him a load of it way back when, Strange just smiled and said, “Fletcher Gaines, that old son of a b—-.”

Daniel, Steed, Boggan, Gaines and other legendary caddies like Hardrock Robinson have graduated to the great caddie yard in the sky, but there remains plenty of fascinating history and an appropriate mix of the new guard in the Pinehurst caddie staff.

“These guys are national gems,” Don Padgett Sr., the director of golf at Pinehurst from 1987-2002, said upon the launch of the Pinehurst Caddie Hall of Fame in 2001. “They are walking history books.”

And they take the game back to its roots—when Scotsmen walked the links and had time between shots to converse with their playing companions, to give thought to the next shot and to properly inhale the nature. That’s even more important on a course like No. 2, which allows golfers to take carts but restricts them to the extremities of each hole.

“On this golf course if you get in a cart, you’re just wasting your time. It’s like going to (Baskin-Robbins) 31 Flavors and ordering vanilla.” -Pinehurst caddie Tom Harmicar

“You get to the ball too fast when you’re riding,” says Willie McRae, at 82 the most senior caddie at Pinehurst in 2015. “There’s no time to think.”

“This golf course was not meant to be played out of a golf cart,” adds Tom Harmicar, a veteran of the staff. “On this golf course if you get in a cart, you’re just wasting your time. It’s like going to (Baskin-Robbins) 31 Flavors and ordering vanilla.”

The caddie business has changed throughout golf and in Pinehurst over the last 100 years. Pinehurst used to have more than 500 caddies on staff in the 1920s and sometimes on busy days the caddiemaster would dispatch a wagon to the local schoolhouse to get more boys. Resort management has been steadfast in the face of escalating “cart golf” over the last half-century to keep the caddie staff intact. In 1997, Caddie Master Enterprises Inc. took over Pinehurst’s caddie operation and has approximately 100 caddies on staff during the busy spring and fall seasons.

“I tell a guy if he’s disgusted with the last hole, ‘Hey, it’s like your first girlfriend. Unless you marry her, she’s history. She’s done. Forget it and enjoy the rest of the day.’” -Pinehurst caddie Eddie McKenzie

“Our job is to enhance the experience of playing a wonderful, historic golf course,” says Eddie McKenzie, a 25-year member of the caddie staff who grew up in Southern Pines and whose experience stretches to the PGA and LPGA Tours. “We help golfers with the subtleties of the greens, with playing the right shots around the greens.

“A good caddie also relaxes the player. The point is, we’re out here to play 18 holes and have fun. This is a hard golf course. It takes its toll. I tell a guy if he’s disgusted with the last hole, ‘Hey, it’s like your first girlfriend. Unless you marry her, she’s history. She’s done. Forget it and enjoy the rest of the day.’” 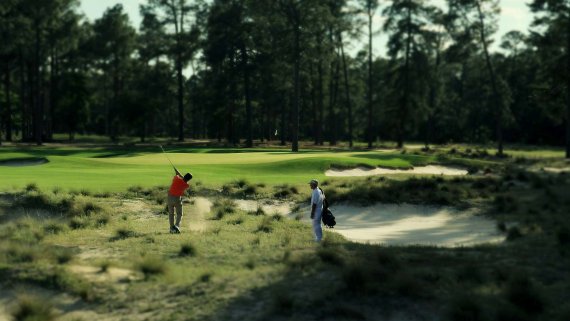 Our most popular package includes accommodations for two nights and three rounds of golf, plus breakfast and a three-course dinner each day.

Thaddeus McRae caddied for 35 years at Pinehurst in the mid-20th century and started his son Willie on the job in 1943 at the age of 10.

“He bought me up here on my 10th birthday,” Willie says. “I could make 25 cents a loop plus tips—enough for candy for a week.”

“I’ve got a few more miles left. My mama always said you’re never old until you die and prove it.” -Willie McRae

Willie’s been walking the fairways of No. 2 ever since, carrying the bags of golfers such as Donald Ross, Gene Sarazen and Billy Joe Patton, ballplayers like Yogi Berra and Michael Jordan and presidents, including Richard Nixon and Gerald Ford. McRae hesitates to list any of them as “celebrities” given the fact, he says, “everyone’s famous to somebody.”

In 2004 he estimated that he’d walked to Los Angeles and back 15 times carrying bags around the course. He still works today, though management has made a concession to allow him to drive a golf cart around the course—anywhere except on the putting green. Son Paul is on the golf instruction staff at Pinehurst and grandson Darick is a caddie.

“And I’ve got a few more miles left,” says McRae. “My mama always said you’re never old until you die and prove it.” 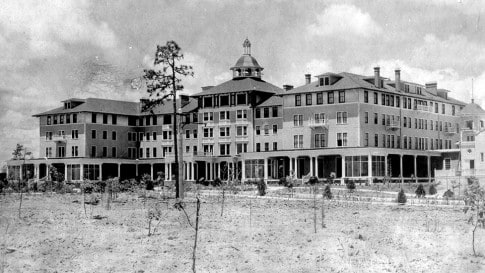 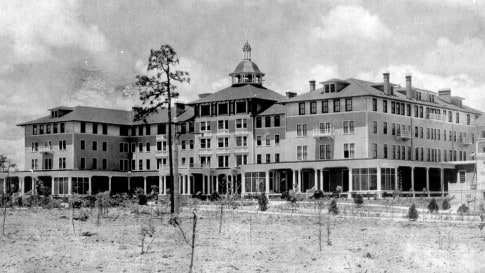