20 Years Ago
It Happened at Pinehurst

In an exclusive excerpt from Kevin Robbins’ upcoming book The Last Stand of Payne Stewart, Robbins chronicles Stewart’s life through an intimate look at his thrilling – and tragic – 1999 season. Twenty years later, and presented here for the first time anywhere, Robbins’ careful examination of how Payne played the 72nd hole of the U.S. Open on Pinehurst No. 2 reveals just how much he changed as a man.

Payne Stewart never doubted his decision to hit driver on the eighteenth hole, and he liked the look of the rising shot until he and Hicks walked up the hill and saw where the ball lay. It was in the right rough, damp and deep, the worst lie they’d encountered in seventy-one holes. It was bad luck at a bad time, especially with Mickelson in the fairway with a good angle to the hole and a midiron in his hand. NBC trained its cameras on Payne’s face. Bells rang faintly at a church in the distant village. Ron Crow, the walking scorer with Payne, heard the throaty welcome of the gallery and thought, The ground is vibrating. Payne consulted his orange-covered yardage book. Pinehurst gave. Pinehurst took. Acceptance came.

He decided to give himself a chance.

The indelible final scene at the 1999 U.S. Open earned its place in the lore of golf for actions taken and options dismissed. The USGA had wanted to present players with options from the shorter rough on No. 2, but Payne convinced himself he had only one. He calculated the yardage to the cross bunkers short of the green. He slashed an eight-iron shot to seventy-eight yards in the fairway, two paces short of the bunkers, “the most boring play in sports,” as he’d called it at the PGA Championship at Shoal Creek in 1990.

By the time Payne stroked the winning putt—fifteen feet, scampering up the slope, bending right, slowing, and gone—Tracey had arrived from the cottage. She saw him punch the air and kick out his leg. She heard him howl. She watched him lift Hicks from the ground and hug him so tightly she could see the veins on his forearms. She wondered what he told Mickelson when he took the face of the runner-up in his hands. (This isn’t the important thing, Payne had told the runner-up. The important thing is that you’re going to be a father.) It was too loud to hear. It was too loud to think. She saw him kiss his ball.

Hal Sutton, who’d finished with a share of seventh, watched the celebration on a television in the locker room. Maturity won the tournament, he thought.

Johnny Miller told viewers, “You don’t expect that out of anybody, especially a guy that’s forty-two.”

The men in charge of mowing the course thought about the curious role of timing. They’d cut the greens hours later than usual in an effort to keep the green speeds high in the persistent mist. It occurred to Paul Jett, the superintendent, that the later mowing schedule might’ve allowed the one revolution of the ball that had made Payne the champion.

John Garrity, a reporter for Sports Illustrated, dialed the number for Bee Stewart in Springfield. He asked Payne’s delirious mother for her thoughts.

“Payne talks more with God now,” she told him. “He’s a different man.”

The different man loped down the brick steps to the Pinehurst bag room to sign his scorecard. He saw a face he recognized. It was Tom O’Toole. Neither man brought up the scene in the parking lot at the 1979 Missouri state amateur, when Payne had insulted Jim Holtgrieve on the night before the final match at Wolf Creek Golf Links, or his conduct throughout the final match itself. Payne and O’Toole shared a quick, tight embrace.

O’Toole leaned in and whispered, “Your dad would have been really proud of you today.”

O’Toole noticed that Payne was crying. He never saw him again.

Payne found Tom Meeks of the USGA, took him by the shoulders, and led him through a door.

“You set up one hell of a golf course,” Payne told him. It was the last time they spoke.

Then Payne entered the caddie room and slumped in a chair.

“Give me a minute,” Payne said. He rubbed his eyes.

Payne signed his scorecard for an even-par 70. His four-round total of 279 had beaten Mickelson by one, Woods and Singh by two, and the rest of the field by no fewer than five. He’d proven that neither age nor lack of length mattered in this national championship. His average driving distance of 255 yards ranked fiftieth in the weekend field of sixty-eight. But the numbers that mattered—putting, fairways, greens in regulation—told the story of his eleventh title on tour. He was eighth in every category, a winning formula at any golf tournament. No one could ignore his skill with the SeeMore through the final three holes. He’d taken only one putt on each of the last three greens.

Payne and his wife returned to course for the presentation of the trophy. Buzz Taylor, the president of the USGA, introduced him as the champion. Payne doffed his navy flat cap and held the silver cup so he could take a long look at it again before he raised it above his head.

“All yours,” Taylor said.

In his speech, Payne said his faith was his source of conviction and belief in himself on the golf course. He blinked back tears as he spoke. 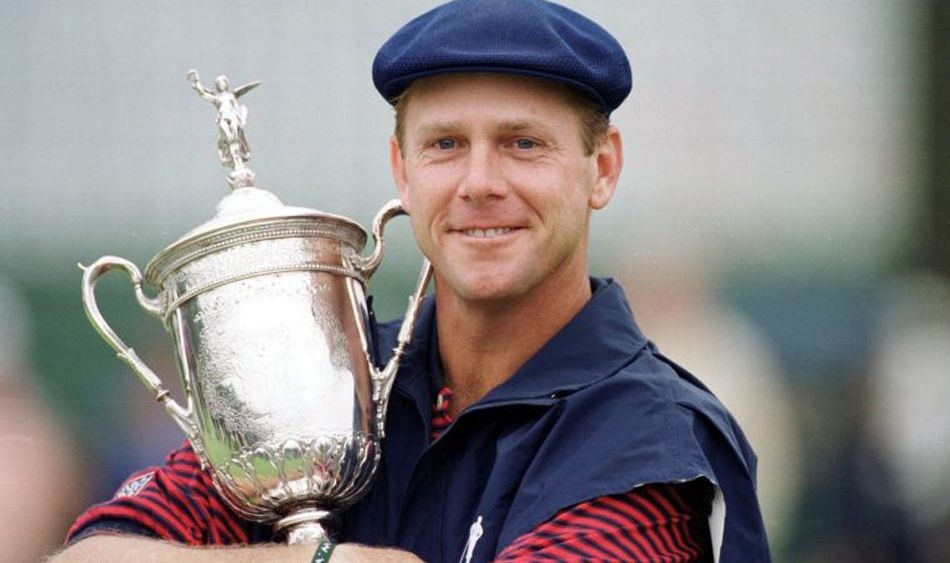 “The scars were still there,” Hicks said.

“I don’t know what to say to that,” Payne said.

“You said that experience made you tougher,” Hicks said.

“Well, I couldn’t ever give up out there,” Payne said.

He mentioned Mickelson and his persistence. He sounded relieved that no playoff would happen in the morning.

Payne looked at Mickelson. “You’ll win yours,” he said.

Hicks asked about the putt to win.

“What was going through your mind when you knew you had to make it?” Hicks said. 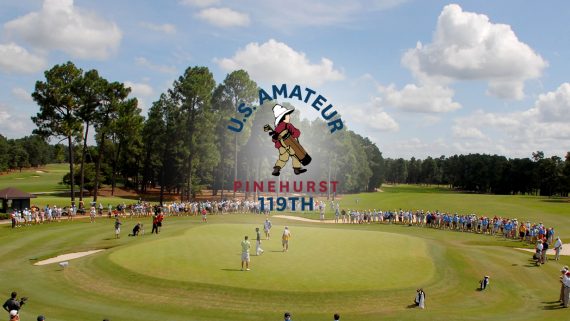