Doris Palmer was fraught with anxiety. It was the 1954 U.S. Amateur at the Country Club of Detroit, and her 25-year-old-son, Arnold, was about to make a serious mistake. She approached Richard Tufts, the president of Pinehurst Inc. and USGA secretary, with her concerns.

Tufts’ primary frame of reference for young Palmer’s golf ability was the North and South Amateur, the tournament the Tufts family ran each spring on Pinehurst No. 2. Palmer never played particularly well in that event, losing by a monster score like 12-and-11 to Frank Stranahan in 1949.

“I’m sorry to hear that, Mrs. Palmer,” Tufts replied. “With that swing of his, he’ll never make it on tour.”

Palmer won the Amateur that week, did in fact turn professional and proceeded to make hash of his critics. Palmer and Tufts were reunited 14 years later in Charlotte, when Palmer spoke on Tufts’ behalf at the latter’s induction ceremony into the North Carolina Sports Hall of Fame. They shared a laugh over Tufts’ gaffe. 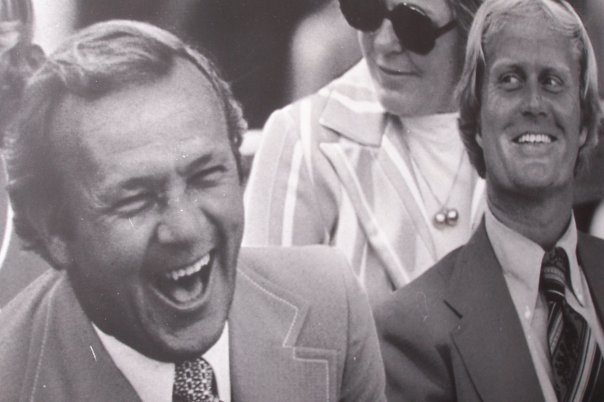 Arnold Palmer shares a laugh with Jack Nicklaus at the inaugural Hall of Fame ceremony in Pinehurst in 1974. (Photo Courtesy of the Tufts Archives)

“There were numerous people, he was just one of them, who got in line to say I shouldn’t have been a golf pro,” Palmer said in a 1991 interview for the book Pinehurst Stories. “They said I didn’t have the game, and my game wasn’t suited. Some of that came from his knowledge of my playing in the North and South. Mr. Tufts was my friend, and a nice man, but he didn’t know there was more to playing golf on the tour than what was visible as an amateur. That means mentally, physically, as well as whatever golf swing you might have.

“Granted, my golf swing has never been one that anyone would take to an exhibition and show off.” -Arnold Palmer

There’s no question it did just that. Curiously, however, Palmer’s name is nowhere to be found in the Pinehurst winner’s circle, outside of a college conference championship. He never advanced past the semifinals in the North and South. He never challenged during the PGA Tour’s decade-long run at Pinehurst in the 1970s. And his game was long past its prime when the 1994 Senior Open came to Pinehurst. 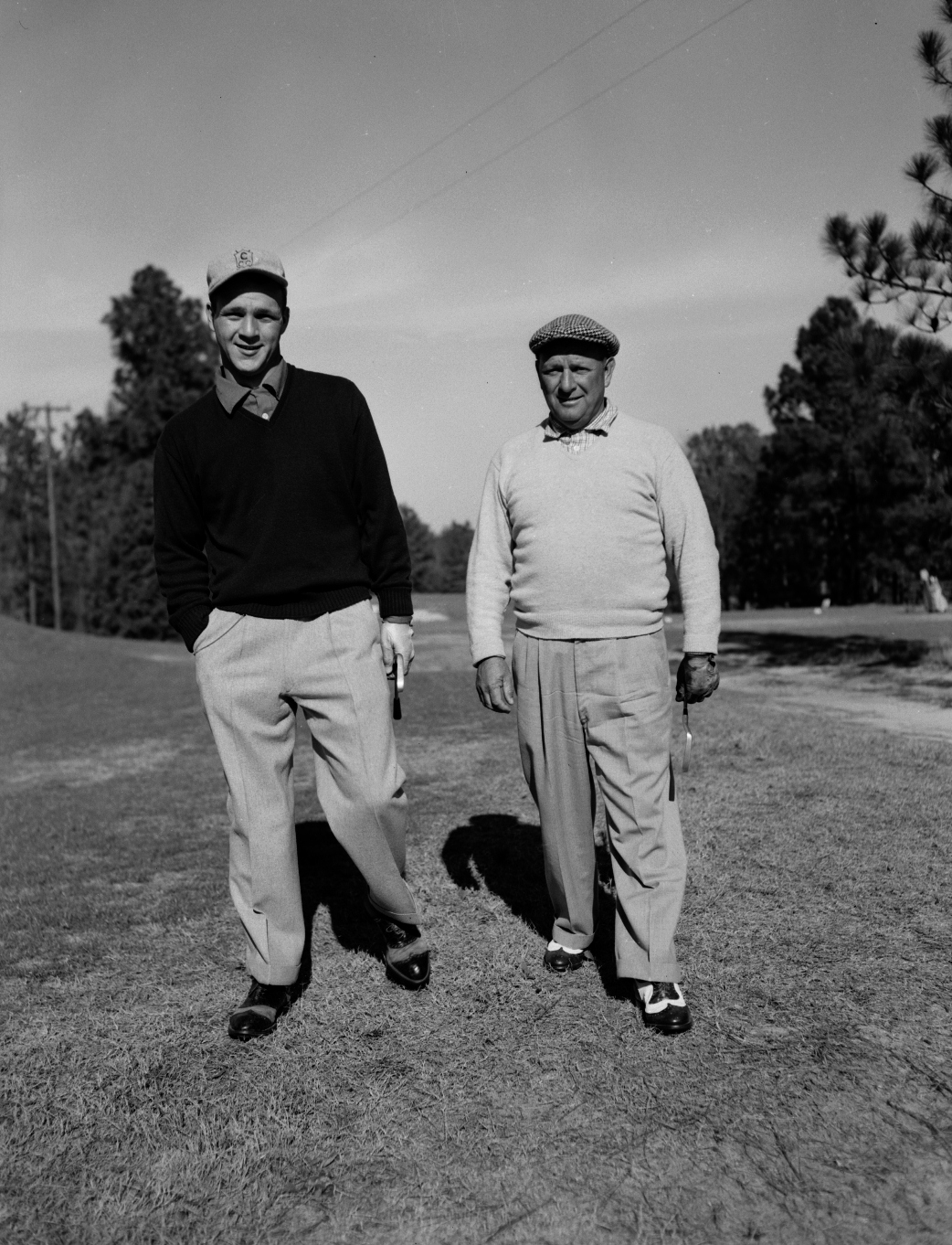 Arnold Palmer and his father Deacon on the 9th hole of Pinehurst No. 2 in 1954. (Photo Courtesy of the Tufts Archives)

Nonetheless, however, he has fond memories of his youthful days playing golf amid the pines and sandy loam.

“Pinehurst was the most elite spot in the world as far as I was concerned. It was the golfing capital of the world. No. 2 was the best golf course I had ever played.” – Arnold Palmer

Palmer’s father, Deacon, visited Pinehurst regularly in the 1930s and 1940s with a group of golf buddies from their home in Latrobe, Pa., and their hotel of choice was the Manor Inn. Arnold came on occasion and then attended Wake Forest College in the late 1940s when it was located in the town of Wake Forest, just north of Raleigh. Palmer and teammates such as Buddy Worsham, Frank Edens, Jennings Agner and Dick Tiddy would pile into a Desoto station wagon for the 90-mile drive to Pinehurst.

Palmer remembers Pinehurst as being the number one place in golf in the 1940s. He wasn’t as enamored in the 1970s with the changes made to No. 2—much of the older, natural look was plowed under by new owners who wanted lush green grass in every nook of the golf course. 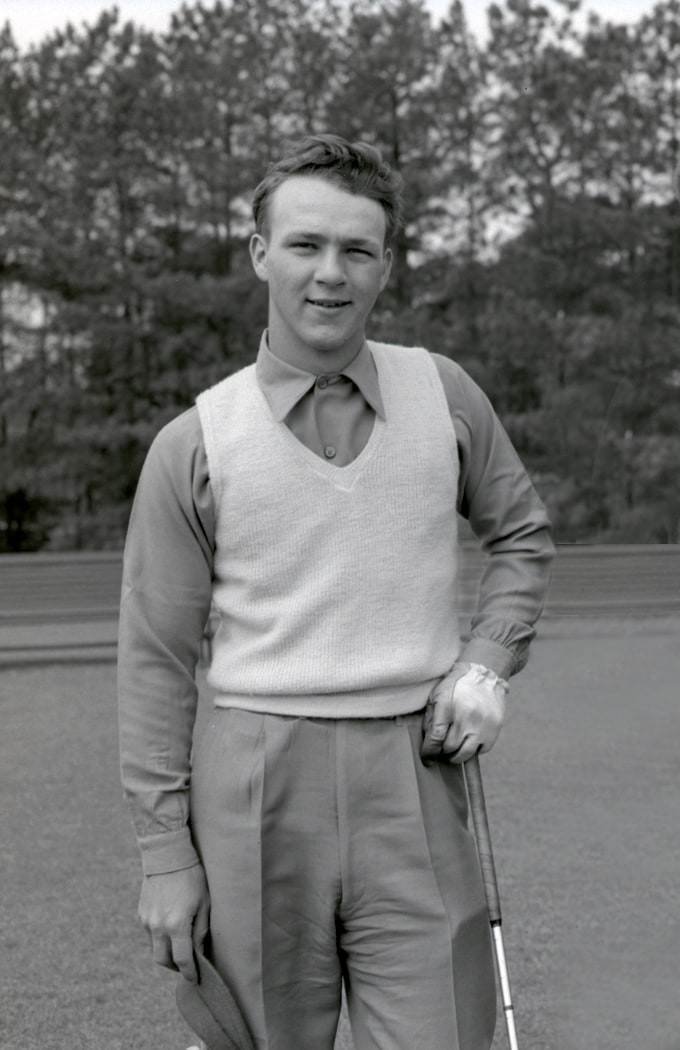 Arnold Palmer poses for a photo before the 1948 North & South Amateur at Pinehurst. (Photo Courtesy of the Tufts Archives)

“Pinehurst was the most elite spot in the world as far as I was concerned,” Palmer says. “It was the golfing capital of the world. No. 2 was the best golf course I had ever played. I was very disillusioned over the years with all the changes they made to No. 2. I just thought as that golf course stood in the ’40s when they had the North and South Open and North and South Amateur, that it was impeccable—it was perfect.”

That’s one of the primary reasons that Pinehurst officials decided in 2009 to retain architects Bill Coore and Ben Crenshaw to restore No. 2 to that “golden age” look that Palmer and so many others embraced.

Palmer returned to Pinehurst annually throughout the 1970s when the PGA Tour played No. 2 from 1973-82, and he was in the inaugural induction class into the new World Golf Hall of Fame in 1974 (which was located just to the east of the fourth green and fifth tee of the No. 2 course and stood there until it was moved to St. Augustine, Fla., in 1998).

Since then the King made occasional visits to Pinehurst, one of the most memorable the day in April 1994 when he and fellow luminary Jack Nicklaus sparred on No. 2 for a match in the renewal of the Shell Wonderful World of Golf television series.

“I have great memories of visiting Pinehurst in the old days,” Palmer said. “For a kid from Latrobe to visit the golf capital of the world was a special treat.”

It was also a treat for Palmer to share a quick visit to Pinehurst in the spring of 2004 with his fiancée, Kit Gawthrop. They stayed at the Manor Inn—since that’s where Deacon stayed 60 years ago—toured the shops, had dinner at the Holly Inn, dropped into the Pinecrest Inn for a drink that evening and enjoyed a visit with Harvie Ward, an old sparring partner from their 1940s amateur careers.

“I love coming here, I loved playing the golf course, I think it’s one of the greatest around. I’m going to come back and play it again before I give up the game.” – Arnold Palmer

He also returned to Pinehurst in June 2014 for the U.S. Open and enjoyed rocking on the veranda overlooking the 18th green of No. 2 and reflecting on his many visits to Pinehurst. He endorsed the look of the restored No. 2, saying the wide fairways, hardpan sand and thousands of wire grass plants reflected the look he remembered from 60 years ago.